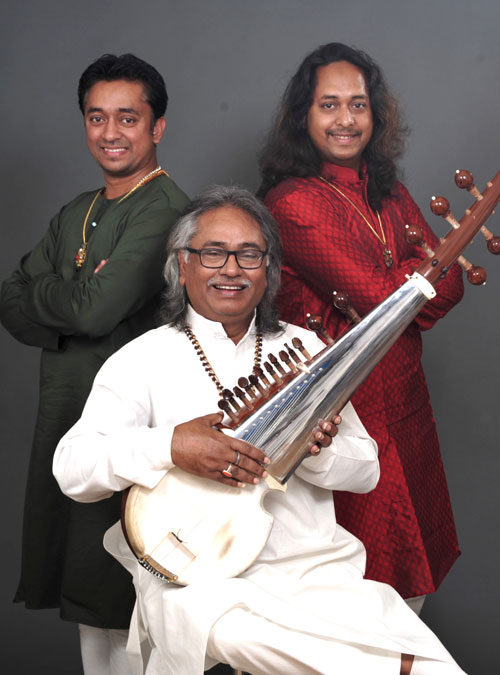 Description of the act -
Belonging to 14 generations of musicians from Varanasi, Pandit Maharaj has enthralled  audiences with his mystical and spiritual compositions. Enriched  by his repertoire of ragas, the heart of all of his music, his musical gift comes directly from the ancient Vedic texts (Mantras).

About the Group -
With exquisite skill and artistry, this charismatic father-and-sons trio from Varanasi breathe great joy and vitality into music that dates back thousands of years. Their repertoire of ragas, the heart of all of their music, comes directly from the ancient Vedic texts. The band has performed at major world music festivals in Europe, Asia, United States, Middle East, Canada, and South America and is empanelled with the I.C.C.R. (Indian Council for Cultural Relations) Ministry of foreign affairs, Government of India.

More About The MAHARAJ TRIO

ABHISHEK MAHARAJ (Sitar Player/Vocalist)
An internationally acclaimed sitar player, Abhishek Maharaj received his early education as a vocalist from Guru Sri Jalpa Prasad Mishra (grandson of Bade Ram Das ji) and later shifted to the sitar under his legendary father Pandit Vikash Maharaj of the Maihar Gharana. Abhishek has trained in both Khayal Gayaki and Drupad Ang styles, which is extremely rare. Abhishek has a wide understanding of music that sets him apart. Bharat Ratna Ustad Bismillah Khan and his grandfather Padma Vibhushan Pandit Kishan Maharaj have both blessed him on numerous occasions. Abhishek has performed at music festivals across the world and in India.