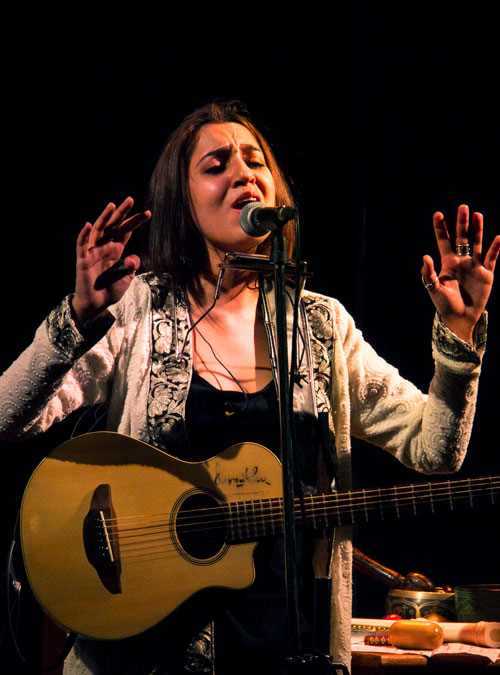 Name of the Act - Jasleen Aulakh

About the act :
With Polly Saghera as the lyricist, Jasleen Aulakhʼs music is best defined as a collaboration between a mother and daughter who inspire each other with a goal to make meaningful music without sermonising.
Predominantly inspired by folk music and some Sufi influences but not restricted by any particular genre , through their music they draw attention to all aspects of the fabric of life — its joys as well as its problems.
Their project aims to popularise folk music

Jasleen Aulakh
Jasleen Aulakh is a singer and songwriter, based out of Chandigarh , and holds audiences spellbound with her melodies influenced by the folk Music of Himachal, Punjab and Rajasthan. With the legendary Punjabi poetess Polly Saghera as her lyricist, this mother-daughter  duo has written many unforgettable songs to inspire world peace. ‘Just Ittefaaq’ is a music project/band (based in Chandigarh, India) led and directed by Jasleen Aulakh. With Polly Saghera as the lyricist, ’Just Ittefaaq’ is best defined as a collaboration between a mother and daughter who inspire each other. The project experiments with different sounds, not sticking to conventional limits, and includes various instruments like the derbuka, djembe, cajon, xylophone, tabla, morchang/dan moi, storm drums, Tibetan prayer bowls, etc. in their act. Polly and Jasleen have also recently made a successful debut in Bollywood with their song ’Chamba’.