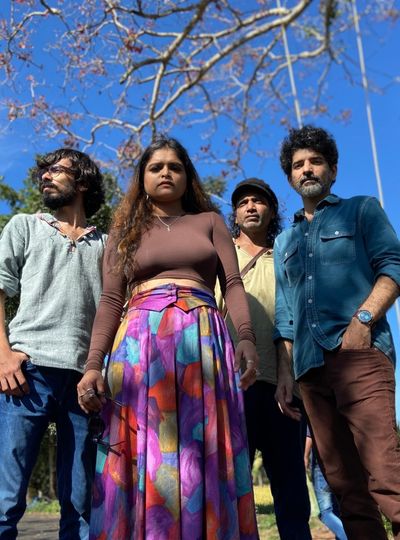 Name of the act
The Tapi Project

About the act:
The Tapi Project's music is woven like fabric, sustained on Yogi’s poetry. Through Swati's powerful and sensuous voice, the lyrics come alive, swallowing us in an ocean of emotions, with songs about rivers, life, lost values, and the universal search for self.

Group Bio:
A blend of ancient tradition and contemporary sounds defines this band from Surat - The Tapi Project.

With its folk and contemporary music fusion,The Tapi Project is a band that performs poetically and believes music to be an extension of who we really are. The band experiments with intricate genres in music like folk, trip-hop, jazz, and ambient textures and uses folk instruments as an essential part of their band.The Tapi Project has performed at more than 30 concerts in the country, and also on the international circuit. They are gaining recognition with coverage by BBC London, Rolling Stones, MTV, Songdew, etc.

More About The Tapi Project

The Tapi Project is primarily a collaboration between Yogendra Saniyawala (Music, Lyrics, Instruments), a traveller, musician and film-maker, Swati Minaxi (Lead Vocalist) who stands out with her distinct vocal style and vast range, and Gaurav Kapadia (Sound Engineer and Instruments), an avid reader, musician, and photographer.