We are gearing up for Mahindra Kabira; are you? 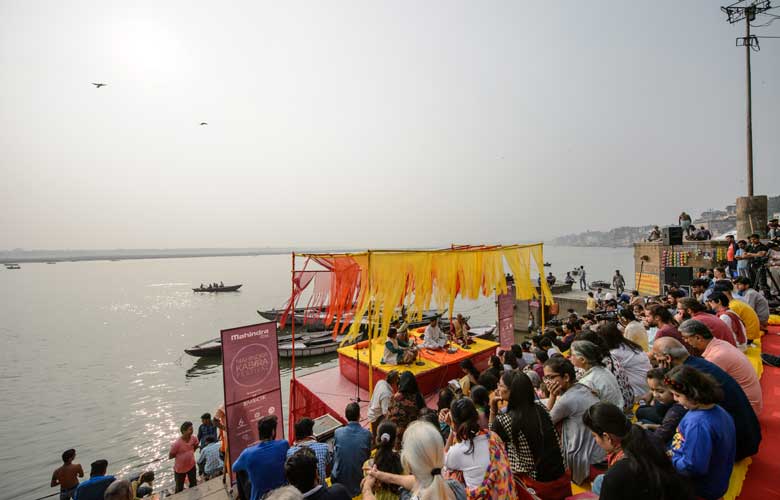 It’s that time of the year again! The early October mornings, a sharpness in the air, a niftier way of dressing to replace summer casuals, an anticipation of things to come and a slow build-up of excitement as festivals and parties, concerts and shows are dotting everyone’s diaries.

For us folks at Teamwork Arts, autumn means the beginning of our very own “festival season” – a season that stretches from now with Mahindra Kabira in timeless Benares to the grand finale of the ZEE Jaipur Literature Festival in January covering in between the length and breadth of jazz, concerts under the Full Moon and some more.

But let’s talk about Mahindra Kabira – it’s my favourite go-to place to feel both calm and chaos, be fascinated and frustrated, and awed and amused! How do I describe this festival? A rare blend of an overpowering city and the ethereal calm of music and Kabir’s clear-headed lyrics alongside a misty river, crowds under starry skies, the swish of brocades and silks, the peal of temple bells, grimy walks through historic streets, stray dogs and many bulls, several grainy staircases, the gentle ebb and flow of the Ganga atop a breezy boat. Where else but at Mahindra Kabira would you find so many sense experiences rolled into two exhilarating and frenetic days?

Kabir, that enigmatic 15th-century poet with his frank, succinct and finely-honed couplets, (which could teach modern-day writers a thing or two about brevity and precision!) and Benares, the eternal city: frazzling, colourful, diverse, crowded, and feverish. While Kabir always calms, conveying thoughts, often visceral and deep, Benares is always alive and never ever a bore! Think how Mahindra Kabira has juxtaposed these two seemingly odd ideas in perfect unison and you will know why so many of us begin to feel the rumble of excitement in October, nearly a month before it commences.

This November, the festival will be flagged off on 16th with characteristic fanfare and its opening reception and then take over our lives on 17th and 18th.  The singers – Malini Awasthi, Kaushiki Chakraborty, Barnali Chattopadhyay, Lakha Khan, Sonam Kalra, to name a few- – are an eclectic mix and they will bring in the dawn for us, reverberate across the ghats as morning mists roll in and we get goose-pimples sipping on our khullads full of foamy, sweet tea and again at dusk when we reach our venues on boats, full of feverish excitement, and wait for the indigo cover of night to fall.

Between dawn and dusk we don’t sit idle: languorous afternoons with leading litterateurs (who include Devdutt Pattanaik and Dr Purushottam Agarwal) and walks deep into the heart of Kabir’s residence and the places he frequented, bazaars of wooden crafts and jaw-dropping Banarasi silks, tangy savouries and succulent mithai, fill us up.

So, people, what are you all waiting for? Come on over and experience for yourself all that I write about. Be prepared for some hurly-burly and some commotion – that goes with the city of Benares -and along with it, a lot of spectacle, drama, transcendental music and evocative dialogue. And yes, be equipped too for several rounds of mind-blowing and deeply satisfying shopping fuelled by lip-smacking, mammoth-sized kachoris to be washed down with fragrant, cooling Banarasi thandai. It really doesn’t get better…