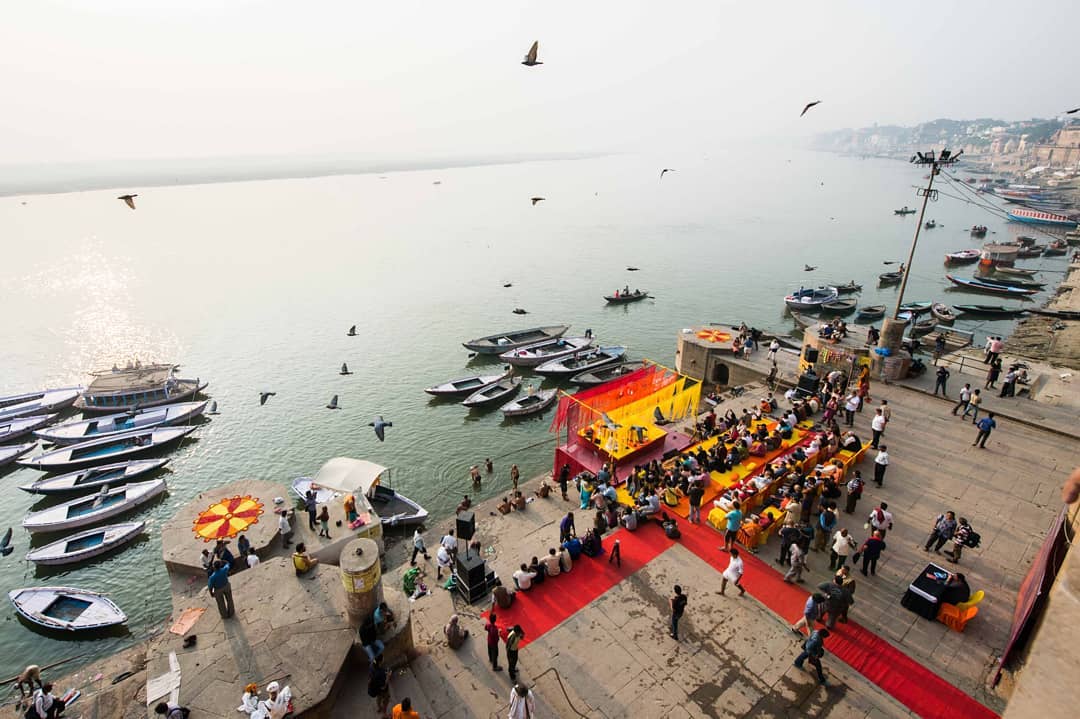 A fine stream of thought connects the ghats of Benaras to the red earth of Shantiniketan. There on the steps of the ghat, legend tells us, Kabir awaited Ramananda, the great Hindu ascetic. As Ramananda inadvertently stepped on Kabir and uttered the words, “Ram! Ram!”, Kabir proclaimed that he had received the sage’s divine mantra and thereby declared himself ordained as his disciple. Thereafter Kabir embarked on a journey of spiritual awakening under Ramananda. Critical of established religion, Kabir’s devotional mysticism is regarded as the epitome of Bhakti philosophy. Centuries later, amidst the verdant environs of Shantiniketan, the great poet Rabindranath Tagore pored over the collected verses of Kabir, transcribed in Bengali by Kshiti Mohan Sen. Drawn to Kabir’s mystic philosophy, Tagore translated and published the first English edition of the saint-poet, titled The Songs of Kabir in 1915.

Mysticism had long enthralled Tagore - while a young administrator at his family estate in Shilaidaha, Tagore had steeped himself in the poetry and philosophy of the bauls of Bengal, the itinerant fakirs who frequented that region. The songs of Lalon Fakir particularly, are said to have influenced him greatly. It is thus no wonder that Tagore was so drawn to Kabir. There is such great resonance between their writings that one marvels at the synchronicity of thought amidst the simplicity of metaphorical allusions.

Steeped in love for the Divine, using the analogy of the loom that was the essential tool of his livelihood, Kabir writes:

“I weave your name on the loom of my mind,

To make my garment when you come to me.

My loom has ten thousand threads

To make my garment when you come to me.

The sun and moon watch while I weave your name;

The sun and moon hear while I count your name.

These are the wages I get by day and night

To deposit in the lotus bank of my heart.

I weave your name on the loom of my mind

And to comb the twists and knots of my thoughts.

No more shall I weave a garment of pain.

For you have come to me, drawn by my weaving,

Ceaselessly weaving your name on the loom of my mind.”

In a similar vein, Tagore expressed his cherished relationship with the Supreme Being. Tagore’s allegorical allusion was that of song and singer. In Verse 2 of the Gitanjali, he writes:

“When thou commandest me to sing it seems that my heart would break with pride; and

I look to thy face, and tears come to my eyes.

adoration spreads wings like a glad bird on its flight across the sea.

I know thou takest pleasure in my singing. I know that only as a singer I come before thy

Drunk with the joy of singing I forget myself and call thee friend who art my lord.”

Central to many of Kabir’s poems is a child-like awe and joyful astonishment. For Kabir, God is the Supreme Weaver, weaving an eternal, elemental warp and weft. He writes:

Of what is made the warp, of what the weave?

What threads went into its weaving?”)

Tagore’s poems too express bemused wonder at the magnitude of creation. Referring to God as the Supreme Musician, Tagore writes,

(“I know not how thou singest, my master! I ever listen in silent amazement.

The holy stream of thy music breaks through all stony obstacles and rushes on.

My heart longs to join in thy song, but vainly struggles for a voice.

I would speak, but speech breaks not into song, and I cry out baffled.

Ah, thou hast made my heart captive in the endless meshes of thy music, my master!”)

For both Kabir, the weaver as well as for Tagore, the writer, true worship lay outside the realm of ordained religion. In Verse 11 of the Gitanjali, Tagore writes:

Open thy eyes and see thy God is not before thee!

He is there where the tiller is tilling the hard ground

And where the path maker is breaking stones

He is with them in sun and shower, and His garment is covered with dust

Put off thy holy mantle and even like Him come down on the dusty soil!

Deliverance? Where is this deliverance to be found…………………..

Come out of thy meditations and leave aside thy flowers and incense!

What harm is there if thy cloth become tattered and stained

Meet Him and stand by Him in toil and in sweat of thy brow.”

In a similar vein, Kabir says:

(“O servant, where dost thou seek Me?

Lo! I am beside thee.

Neither am I in rites and ceremonies, nor in Yoga and

If thou art a true seeker, thou shalt at once see Me: thou shalt

meet Me in a moment of time.

Kabîr says, "O Sadhu! God is the breath of all breath." - translated by Tagore)

According to Kabir and Tagore, the divine could be be found within oneself - a seeker did not have to look further afield. For, isn’t the Universe contained with our very beings, questions Kabir?

(“Within this earthen vessel are bowers and groves, and within it

Within this vessel are the seven oceans and the unnumbered stars.

The touchstone and the jewel-appraiser are within;

And within this vessel the Eternal soundeth, and the spring wells

Kabîr says: "Listen to me, my Friend! My beloved Lord is within." - translated by Tagore).

(“Thou hast made me endless, such is thy pleasure.

This frail vessel thou emptiest again and again, and finest it ever with fresh life.

This little flute of a reed thou hast carried over hills and dales, and hast breathed through it melodies eternally new.

At the immortal touch of thy hands my little heart loses its limits in joy and gives birth to utterance ineffable.

Thy infinite gifts come to me only on these very small hands of mine.

How are we to understand this intimate connection? This vision of the Supreme both intensely familiar, yet so gloriously awe-inspiring. In the introductory essay to The Songs of Kabir, Evelyn Underhill suggests that Kabir belongs to a small group of supreme mystics who have achieved a “synthetic vision of God” by resolving “the perpetual opposition between the personal and impersonal, the transcendent and immanent, static and dynamic aspects of the Divine Nature”. He did this by ascending to a height of spiritual intuition where seemingly incompatible concepts are perceived as completing opposites of a perfect Whole. Underhill further writes that this process entails a universe of three orders: “Becoming, Being, and that which is "More than Being," i.e., God. God is here felt to be not the final abstraction, but the one actuality. He inspires, supports, indeed inhabits, both the durational, conditioned, finite world of Becoming and the unconditioned, non-successional, infinite world of Being; yet utterly transcends them both.”

Even as Underhill writes thus of Kabir (among other great mystics such as St. Augustine, John Ruysbroeck and Jalaluddin Rumi), the intuitive consciousness that welled along the shores of the Ganga, along the ancient city of Benaras in the 15th century seems to have found its way to the banks of its little known tributary Ajoy, skirting the fields of Shantiniketan 400 years later. In the writings of Tagore we find a strong resonance, a similar simple spirituality. It seems no mere coincidence that a further century later, I read the works of Kabir through the translations of Tagore. A new friend found through the work of another lifelong friend and companion. Serendipitous? Or does the Universe truly move in mysterious ways? Do answers truly appear before quest seekers? Do we but need to ask the questions?

Beautifully written Ranu dear, next year you have to be in Varanasi for Kabira, it really is a divine experience. And for you, the connection with Kabir and Tagore will only get deeper. Once again, an amazing piece, have to read it again.

Another interesting piece of work. Ranu... You are amazing... Tumi tomari upoma