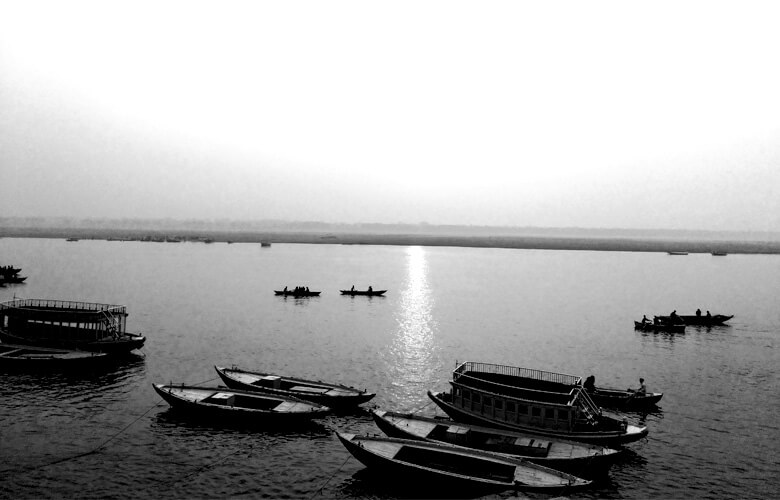 As the Mahindra Kabira team approached D-day when the festival, which annually celebrates Kabir, was about to begin, our anticipation reached a fevered pitch. Batches of people from my office, Teamwork Arts, left in close intervals for the eternal city, welcome gifts were chosen after opinions taken and rejected; they were packed, tasselled, sprinkled with gold dust; gift boxes for festival delegates were designed and then hauled into cartons ready for take-off into exotic lands, signages made, branding finalized, artistes and their whimsical schedules coordinated with and in the midst of it all, the attire we will wear and Benarasi savouries we craved planned in cosy whispers!

We were all caught in the maelstrom that was Mahindra Kabira – right from the frazzled nerves of delayed flights thanks to Delhi’s ongoing apocalyptic smog to frenetic preparations of sending cars and boats to multiple places where eager delegates awaited in the glorious violet dusk of the opening night. The startling Brijrama Palace Hotel dressed itself in silken robes and was lit with the glow of a million fairy lights to welcome weary travelers seeking a getaway.

The opening night was spectacular – as soon as we sat on the boats which were taking the festival delegates and us to the majestic Brijrama and saw the vast expanse of the darkening Ganga lit up with floating diyas left by countless devotees and stared at the ancient shadowy ghats and their sentinel havelis, edifices of a more noble era, we felt a sense of calm wash over us which propelled us through the next two days in a city characterised as much by its fascinating nature as by its chaos.

We walked out of the boats, climbed steps as old as history, nimbly managing our resplendent saris and floated into an ambience wrought with fresh flowers, music, magic, and people. The Brijrama Terrace echoed with the mellifluous voice of classical Benares Gharana singer Vishnu Mishra; our guests’ faces shone with the russet glow of lamps and enthusiasm; behind us the rich aroma of kachoris and chai mingled with the excitement of the evening. Kulhads of thandai crackled even as conversation ebbed and flowed. The city had welcomed us, the river had claimed us as its own, Kabir’s verses reverberated around us – we had arrived at Mahindra Kabira 2017 in style!

The next two days passed by in a flurry of activity, angst, fervour and overwhelming music. We would rise at dawn, slither into our careful chosen finery, rush down the steps of Assi Ghat, gape at passing boats and the emerging crimson sun, and be at Darbhanga Ghat in droves along with our guests. The Morning Music on both days was soothing, hypnotic and powerful – where Rashmi Agarwal and Sucharita Gupta held us captive to their rich layered renditions of bhajans and thumris, Kumar Sarang evoked fresh perspectives through the sarangi’senigmatic tunes. We watched in awe the morning mists rolling in from the river as we tasted the refined flavours of the frothy incandescent nimish, another Benarasi staple made especially available to us that mystical morning.

Sadhus smeared in ash, robed and disrobed, bathed and shouted sonorously around us, chai-wallahs hawked their wares, bead-sellers walked with their kaleidoscopic colours– the quintessential Varanasi tableaux almost holding the exotic orient in its palm came alive as the sun rose.

For me and for a lot of us, the young Byronic singer Harpreet was a revelation – he with his jazz guitar, rich, timbred voice setting Kabir’s pithy couplets to heady music was compelling, both when he performed solo or in a trio. The Evening Music was ethereal – Chota Nagpur Bageecha bedecked with canopies, cushions, bolsters and food stalls with steaming cauldrons rang with the electric and contemporary tunes of Bindumalini and Vedanth, the earthy folk of Nathoo Lal Solanki and Mahesha Ram and culminated in the regal grandeur of Shubha Mudgal’s honeyed voice.

The finale was at Assi Ghat – it truly was an experience which I will remember for many years – more than 25,000 people descended around the stage – people stood on rock-faces, hung from scaffoldings, almost fell out of crumbling banisters of old riverside homes. They cheered as Nathoo Lal Solanki and his troupe followed a stunning Ganga arati, held their breaths as Harpreet and Maati Baani with their consummate voices translated Kabir into a modern idiom and awaited the stupendously popular, the people’s performer – Kailash Kher and his band Kailasa. Kailash Kher made the crowds go mad; he played to the galleries, electrified the ghats and made the spirit of universal one-ness that Kabir had preached seem palpable that night.

Varanasi revealed itself to us not just through the Morning and Evening Music but through curated walks organized for delegates down narrow alleys, past temples and mosques, shops, and hawkers. We found treasures – a stowed-away Jain temple with incredible murals, an ornate doorway, hidden nooks with Shiva lingams, European cafes in the heart of a street running wild with stray dogs and drainpipes. We drank authentic cappuccino on a terrace of an old house with traditional red flagstone floors and spiral staircases in Bengali Tola; we found the house in which Tulsidas had composed a poem inconspicuous in a crowded galli, we jostled through crowds and got that coveted darshan at the Kashi Vishwanath Temple. We heard tales of arduous labour when the knowledgeable Abha Dalmia spoke of the weavers of Benares, of whom Kabir was kin; we listened riveted to Ankit Chadha’s impassioned dastangoi about the varying faces of art and life, fact and fiction; we heard Vinayak Sapre’s novel take on personal finance as he rattled off dohas and brought their relevance out to modern-day lexicons of stocks and investment.

All this and more were unlocked for us by the Mahindra Kabira Festival – the great enabler. For that I am truly thankful. May it grow to an even more harlequin canvas in the years to come, smoothening some rough edges and adding many more tuneful ones.