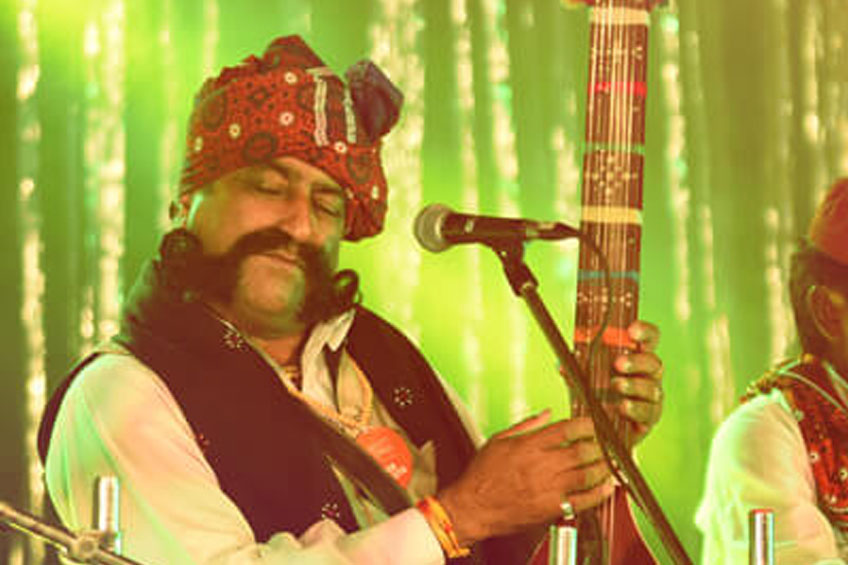 A few years ago, I was on a visit to the Spanish city of Sevilla. At the end of the first two days of sampling the city’s many historical delights, it was time to delve into its greatest offering- the flamenco venues. I had hit upon a bar called ‘La Carboneria’ which was an old favourite of the neighbourhood and stepped into the fiery world of a flamenco dancer who whirled into a blaze to the strumming of Spanish guitars. After the performance, as the audience dispersed and the musicians stepped into the shady, cobbled courtyard for an improv session, I struck a conversation with one of them named Juan Gotan. It was sheer agony trying to communicate with Juan - he spoke no English and I no Spanish and yet, I did want to convey my gratitude for an evening I’d always remember.

We gave up and were about to part ways when he asked, “Which country?” I told him I was from India and out flew the names of Rajasthani towns and a mention of the Jodhpur RIFF in a thick Spanish accent and I asked him if he meant the one at Mehrangarh Fort. Yes, he said, the one at the fort and while on his visit, he had also followed the poetry of Meerabai - unable to place the link between the Jodhpur RIFF and Meerabai, I was prompted to know more.

The Maharaja of Jodhpur, I was told later, had a penchant for bringing together Andalusian and Rajasthani musicians and it is said that even having never met before, these musicians from two vastly different geographical contexts are often able to slip into seamless collaborations. Such cultural similarities are always exciting, and in my quest to find out more, I came upon the theory of the ‘Romani’ people who had left the shores of North-Western India a thousand years ago, possibly fleeing persecution, to move through the Mediterranean world and settle variously in Egypt, Romania, Turkey and Andalusia. Their music, ethnicity and languages adopted thick regional overtones over the centuries but remnants of their lives from their region of origin, as the links between them today, have proven to be a matter of endless fascination for historians, anthropologists, ethnomusicologists and film-makers.

On the topic of the peripatetic musicians of Western India, most serious people would recommend a healthy dose of cynicism - the idea of an ‘outed’ people making music out of their dire situation provides a certain aura, which must indeed be taken with a grain of salt. And yet, India’s history is full of such figures - nomadic dissenters who urge their fellowmen, often with the help of poetic verses, music and dance forms, to challenge the arbitrary actions of the powerful and turn difficulty into an opportunity.

Drawing on the tradition of wandering minstrels of our country and combining two of our greatest talents - the 15th century poet-saint Kabir and the Meghwal musicians of Western India - Mooralala Marwada is a folk singer from the Janana village of Kutch in Gujarat, who specialises in renditions of Kabir’s verses among others. He is descended from a lineage of Meghwals who migrated from Rajasthan to Kutch over four centuries ago and claims to be the 11th-generation singer of the community.

Performances of Mooralala show him seated, propped up against a Kutchi mud-wall with white Lippan motifs, his beard encroaching bearishly on his cheeks in the signature Kutchi manner, although unable to obscure his smile that is brought upon by his melodies.

Mooralala’s singing sways between moods - his voice and harmonies sometimes express a passionate forlornness, only to be interrupted by a melodious chuckle before taking the listener to a state of contentment with light, jubilant tones. He moves between Nirguni Bhajans, traditional folk songs, Sufiana Qalam and the amalgamation of regional styles and Bhakti poetry like this one:

To my husband’s house any more

My heart is set on wandering free!

I’m drawn to the joys of penury!

These verses were originally sung by Meerabai, the 16th century poet-saint from Rajasthan, as she left the sandstone pavilions of her husband’s palace to a life of joyous abandon - signifying the surrender of the material world for spiritual pursuits. On hearing his version of the piece, one gets a sense of Meerabai’s euphoria and longing for adventure that Mooralala captures so masterfully with the modulations of his voice and also his instruments. Whether it be the wooden clappers made from the Karad tree, the clinking of iron and brass bells, or the fruit of a wild creeper and leather strapped together - all of which make his string instrument - the musical paraphernalia seems not just to recall the landscapes traversed by Meerabai and the Meghwals but also contain them.

There is a santar (tambura) clutched in his hand to accompany his voice, in keeping with the tradition of saints like Meerabai or Shah Latif. The setting is often combined with players of the khartal, the manjira or the marwadi dholak to accentuate Mooralala’s singing but he says that he had first heard the santar, which is the pièce de résistance of his act, when he was 8 years old and that he was so enchanted by it that he couldn’t sleep. Presently, he teaches his craft to his 14-year-old daughter and sings with her.

Mooralala Marwada will be unleashing his musical sumptuousness soon at the Mahindra Kabira Festival (November 24-29, 2019). Come and hear him evoking Kabir in Varanasi, the birthplace of the luminary, and pick which of the three kinds of people (described in the Meghwal tradition) you want to be in the audience- ‘Sunghiyo’ (those sniffing around the audience looking for familiar faces), ‘Poonghiyo’ (those who absorb the music) or ‘Oonghiyo’ (those who doze)!