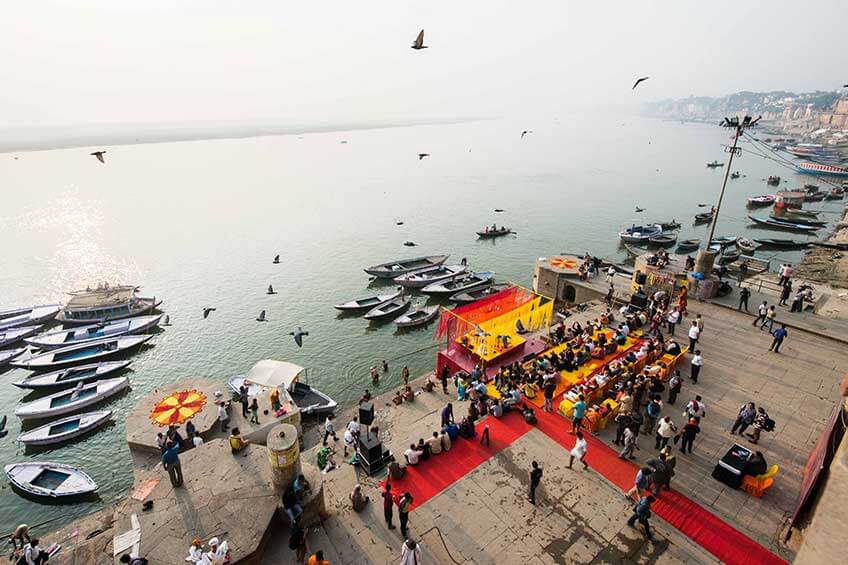 And it’s over ! Too little too soon..

Varanasi and music and the maverick Saint Kabir ! The city is an anomalous churn of the ancient and the universal in a modern world at war with itself. I say this with careful  reflection keeping in mind the sensitivity of the holy city… For its citizens and the thousands that flock to its hallowed Ghats for appeasement and succor to the insecurities that plague  humanity down centuries and across genres.

It’s a war  against the pollution that is a pall over the morning/evening sky shadowing  the holy Ganga revered as the Mother Goddess ! It’s a fight against the appalling  filth on every narrow alley  lined with sacred Shiv Lings and sundry alcoves housing gods and goddesses from the pantheon of Hindu Gods. And it’s a battle against the enormous divide betwixt religious communities who had over centuries  created a cultural crucible  of plurality which is  now sought to be torn asunder. A crucible  of amity equity and  breaking the  norm; of questioning the material! of  peaceable co -existence  through music and art and religious  harmony, which was unparalleled anywhere in the world .

Kabir sang of love for your brethren, for sanguinity for simplicity ! His dohas have been sung in local dialects: through classical  folk and tribal music and in rock and reggae! Kabir spoke of inclusiveness, in the simple lines which many a  child has hummed in school or college.

We laid it out for the people of Banaras over 2 days:  to consume and revisit, or banish and reject as the case may be!
Shabnam Virmani’s powerful vocals on the morning music stage set atop the gently flowing river ‘neath a caparisoned awning of yellows and oranges interspersed with Devashish  Dey’s thumris and dadra and Azeem Ahmed Alvi’s  Sitar. The magic of the golden morning reflected on the sun dappled ripples of the Ganga  echoed  with strains of  Atul Shankar’s flute.

The evenings were staged  on the  sacred Assi Ghat , the most popular and  populous of the many Ghats that line the Ganga. From the refined classicism of Mir Mukhtiyar Ali’s  Sufiana Qalam to  the gentle rhythms of Pt. Rajan  and Sajan Misra, the fresh young energies of Kabir cafe and the sublime transformational renditions by Pt Ajoy Chakrabarty,  Prahlad Tipanya, one of the most compelling folk voices of Kabir  and the gentle melodies of Vidya Shah were  powerful engagements with the spiritual and social thought of Kabir.

Kabir’s voice echoed through many  musical mediums, voices young and old , with one common thread – Each voice resonated with  a conviction of the truths so simply told by the Fakir Kabir.

The audience flocked to each show . They rocked to the melodies and rhythms age old and new age! We swung and swayed to the truths unveiled in each Doha (couplet). We nodded wisely to the simple words of Kabir. But was it just as ephemeral as the sunlight bouncing off the ripples of the Ganga !
The mighty walls of the Ghats speak of histories that generations have swept past…
Of rituals and ceremony  which have now descended  into meaningless rites only creating masses  of expendable  garbage and nightmarish environmental issues.

Thousand descend into the streets of Banaras on Dev Deepawali, Chaat Puja, Shiv Ratri  and many such evocative festivals. Hordes of overseas tourists ply the river capturing the colourful and unfamiliar spectacle frame by frame through cell phones and cameras , undoubtedly searching for the famed city once steeped in  music, art, mysticism and religion which housed the towering figures of Tulsidas, Kabir, Guru Nanak all coming to it during their moments of  epiphany.

The birthplace of the Benares Gharana of music, home to the renowned Benares Hindu University, Varanasi has had Pandit Ravi Shankar, Ustad Bismillah Khan, Girija Devi hailing from its hallowed precincts. It’s mythical mystique is sadly  absent in the bedlam of ritual and blind belief! It’s truth is hidden within  layers of conditioned thought. The spiritual ethos is lost in mindless ceremony and a gluttony of tradition and conformity with no curiosity, no questioning and no regard for the search, for the of quest  Kabir s wisdom.

Through the matrix of musical traditions and the continuous pursuit of the plurality of Kabir’s insights, the Mahindra Kabira festival  will continue to offer a vision of a universal world, an inclusive world that is hidden within  the maze of quaint alleys and byways, the chabutrasand ghats where sages and seers from time immemorial chanted, sang and enchanted with real philosophies and simple truths !