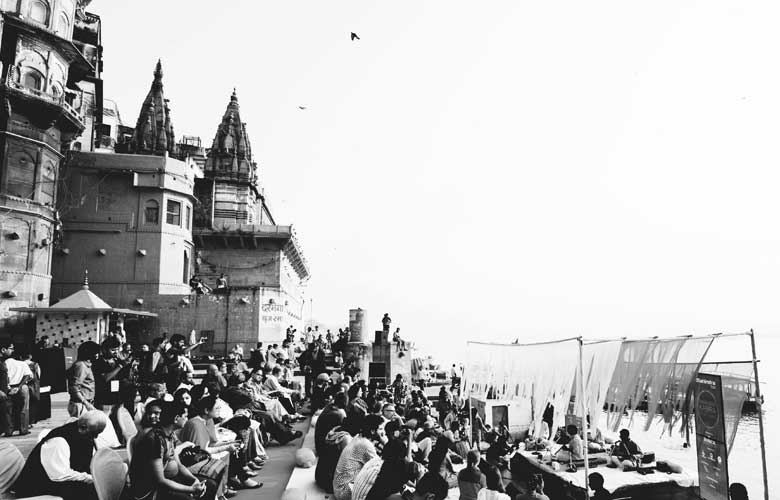 I met Varanasi like an old friend this year.  After two successful editions of the Mahindra Kabira Festival, I felt more like a city veteran and less like an arriviste. When my fellow boat-ride companions inhaled with heavy sighs of awe at their first glimpse of the morning sun rising out of the golden waters with an imperious turn of the head, I smiled rather smugly knowing how they would be feeling, having been there; done that. I was like a knowledgeable patron, opening up my treasure chest of artefacts to a group of newbies and Kabira novitiates!

The Festival, the city, the river, the grimy streets, the now intimate crumbling buildings on the ghats which I glimpse every year from ferrying boats, the misty mornings of crystal sounds, the evenings of anticipation and transcendental music, albeit reassuringly familiar, remain still unforgettable. However much may we turn up our well-heeled cosmopolitan noses on the incredible “oldness” of the city, or on the labyrinthine lanes we had traversed on the Festival’s curated walks, how we may inwardly and often outwardly baulk at the traffic which had snaked up behind and ahead of us, and marvel thinking of the cycle rickshaws which had jostled for space between inch-wide slivers available between heaving taxis, Varanasi stays with us, like an old and haunting movie tune, or a childhood scent, familiar, frustrating, but never bland or irksome, and certainly never forgettable.

But the more lasting impressions which I will probably carry in my  heart are the ones of banter and bonhomie amongst all of us: a motley group of Festival hosts, delegates, attendees, visitors, press; shared Instagram pictures; hurrying through pre-dawn shuttle pick-ups; borrowing wraps to beat the crisp morning chill, queuing up at the crowded and magnetic chaat counters and braving mild looks of curiosity by the servers at the second and third helping-seekers; waiting patiently as giant earthen cauldrons of nimish (that incandescent and incomparable Banarasi dessert, another familiar Festival staple) were getting set up, planning and comparing outfits for the evening; keeping track of each other at the guided heritage walks with their attendant mandir and masjid halts; holding onto each other while gingerly climbing a hundred steps, staring open-mouthed at a deep crack neatly dividing the ancient kangan wali haveli in two while it stood bursting-at-the-seams with inmates and squatters; and even jumping bravely next to the very precarious drivers’ seats on e-rickshaws when Festival cabs bailed on us thanks to some heavy-duty political rallies. Mahindra Kabira’s experience quotient is frankly unbeatable!

This is what I will remember, until next year and the next Kabira. That once a year, the enigmatic Kabir does bring us all together – under one starlit sky or on one sun-drenched riverbank.