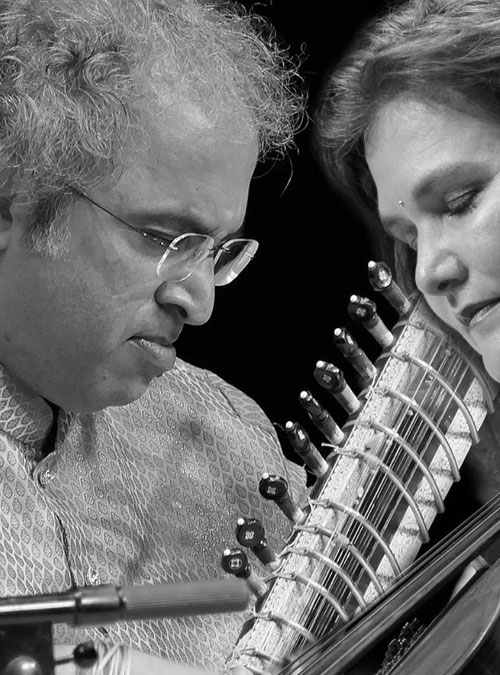 Act Description -
Kabir describes in his poem ‘Jahn khelat vasant rituraj’ a place he wants to reach. Where Anahat, the unstruck mystical sound at the origin of creating the universe. He makes other beautiful references to the role of music, especially the veena (the collective name of string instruments at Kabir’s time) of Sarasvati in connecting with the divine. We created a symphonic poem, a wordless instrumental composition, expressing the essence of this poem: to describe the ecstasy of connecting with the divine where the Unstruck music sounds itself and where millions of Saraswatis, Goddess of Music, play on the vina. This beautiful translation of the original text is by none other than Gurudev Rabindranath Tagore.

Pt. Shubhendra Rao-
A protégé of Bharat Ratna Pandit Ravi Shankar, Shubhendra Rao has established himself “not only as a master of his instrument but also as a thinking musician, constantly endeavouring to carry his instrument beyond conventional boundaries”. Critics and connoisseurs hail him as a worthy successor to his Guru’s tradition. His relentless service in promoting Indian music has made him a highly respected figure in the field of music and education across the world.

Master Saskia Rao-de Haas
Maestro Saskia Rao-de Haas was trained as a Western cellist from a young age onwards, but changed direction when she came in touch with Indian music in 1993. She is known as a master performer in Indian classical music and hailed as the creator of a new instrument: the Indian cello. Flute Maestro Pandit Hariprasad Chaurasia speaks of his disciple Saskia as “someone who has been taught by God.” Critics and audiences alike have praised her for artistic depth and technical virtuosity.